From humble beginnings in a school classroom at Ayr Academy in 1946 to becoming one of the longest established, much-loved amateur dramatic groups in Ayrshire – the Ayr Fort Players.

The earliest productions were staged at Ayr Town Hall, a challenging venue in which to perform drama. Limited lighting, acoustics, no proscenium, absolutely no changing facilities ..... but they persevered. Then came an absolute revelation for the local drama community – Ayr Burgh Council had been convinced to buy and convert the Robertson Memorial Church into a Civic Theatre. So, from 1951 through to the early 2000s, local drama groups and touring companies had a wonderful new home. The theatre was an ideal size for drama and is still fondly remembered by those who played there or attended performances. In 2009 Ayr Council took the decision to demolish the theatre with concerns that there was an asbestos problem – that was an incredibly sad day when that happened. Without a home, the Ayr Fort Players took to producing their plays at Belmont Academy, again a challenging venue but, again, they persisted. After the Gaiety Theatre was saved and taken over by Ayr Gaiety Partnership, the Ayr Fort Players had, once again, found a new and exciting home.

The Ayr Fort Players was the first amateur group granted the rights to Tony Roper’s famous Scottish comedy The Steamie, which played to packed houses during the 1997 Ayr Festival. More recently, for Homecoming Scotland 2009, the production was Rikki Fulton’s uproarious A Wee Touch O’ Class. Since then, the productions have covered Alan Ayckbourn’s How the Other Half Loves, another successful production of The Steamie, The Vicar of Dibley, Noises Off, No Sex Please We’re British, The 39 Steps, Stepping Out (which was produced at the Town Hall while the Gaiety was going through a facelift), The Ladykillers, City Lights, Gaslight, Murder on the Nile, etc. Our last production, before the Covid 19 epidemic took hold, was the hysterical farce Don’t Get Your Vicars in a Twist – this was, in fact, the last production to take place at the Gaiety before it was forced to close its doors due to Covid restrictions.

In a normal year, the Ayr Fort Players stage two productions, one in spring and one in autumn. Also, they are involved in Ayr’s many cultural events, such as ‘ladies-only’ productions as part of the annual SeptembAyr Festival.

All profits from their productions are donated to Cancer Research and, as of 2021, in excess of £50,000 has been handed over to this much deserved charity.

And the story is far from over – the Ayr Fort Players will continue, stronger and more entertaining than ever, throughout the coming decades.

The Ayr Fort Players invite you to step over the doormat and join them for an evening of brand new monologues – all specially commissioned by the company –  set on one local street, each offering a peek behind a front door into the house and the worlds beyond. The characters we meet are our neighbours, our friends, our loved ones, and their words remind us that whoever we are, we live here, and we all have a story to share. The door’s open. Come on in. 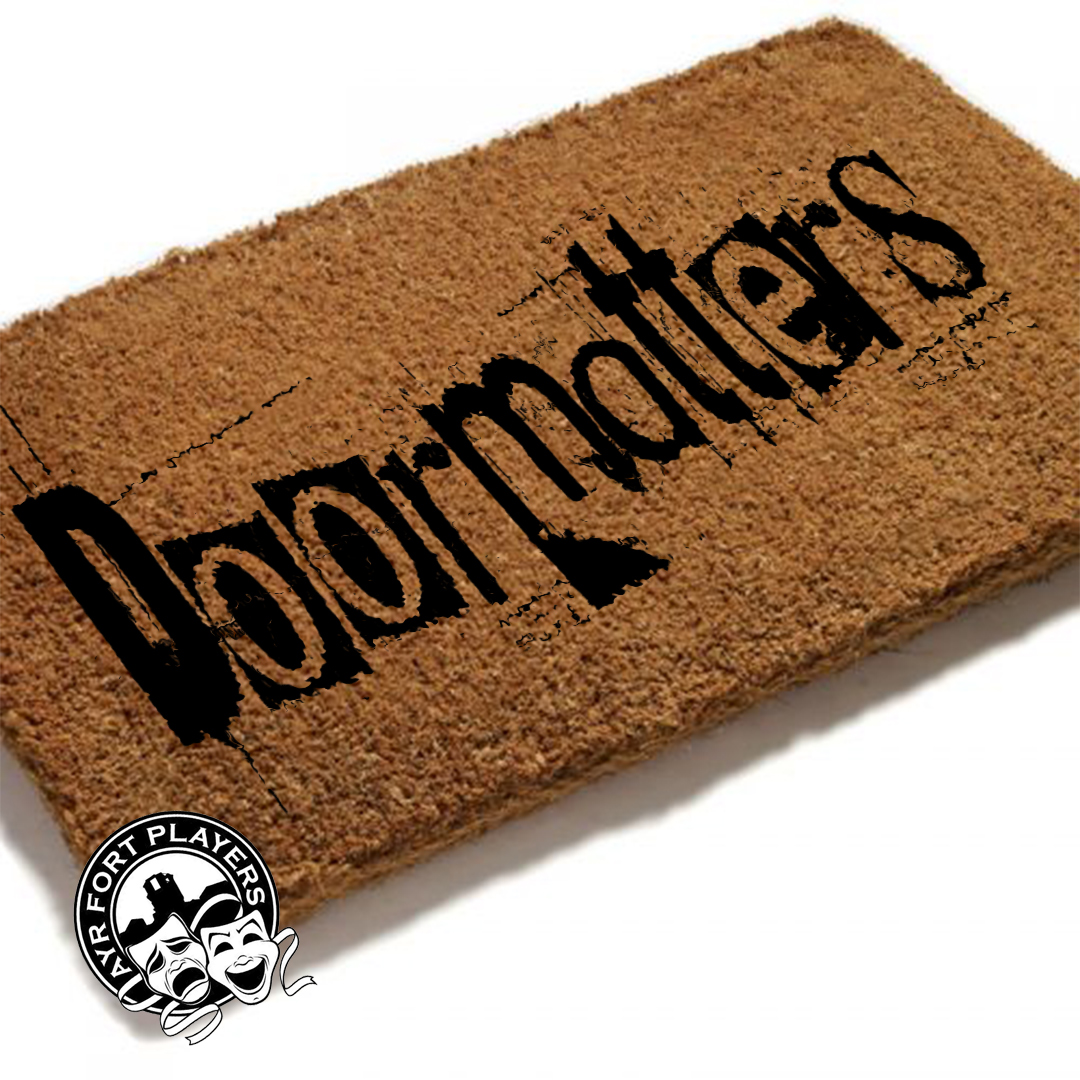 Click on the arrow for details of shows. If show has a live link then clicking on it will lead you to any images we have in our archives

After a very successful production of The Happiest Days of Your Life at the Gaiety in April 2022, we are going to be presenting an evening of monolgues at the Gaiety Studio. All pieces will be written by local writers and performed by local talent. If you would like to be kept informed, then please fill in the form below. Next year we will be presenting two plays - one in Spring and the other in Autumn - we haven't chosen them yet! If you have any play you would be interested in seeing the Ayr Fort Players perform, then also let us know that too. We are always happy to hear from you.

We all have memories of being part of a club or society - good and bad.

We are asking members, past and present, to share those memories with us. 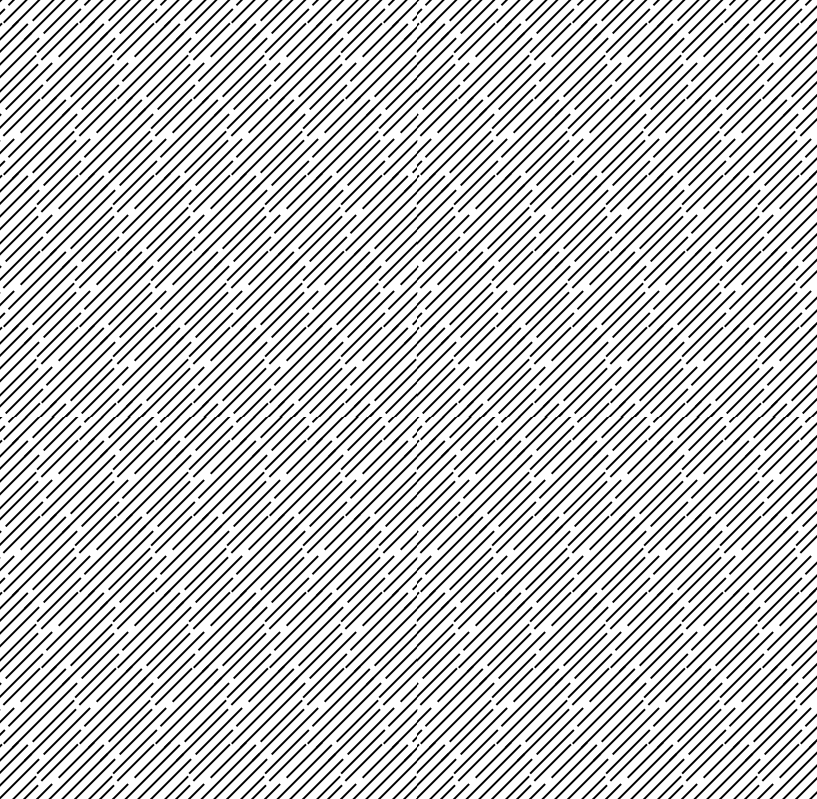 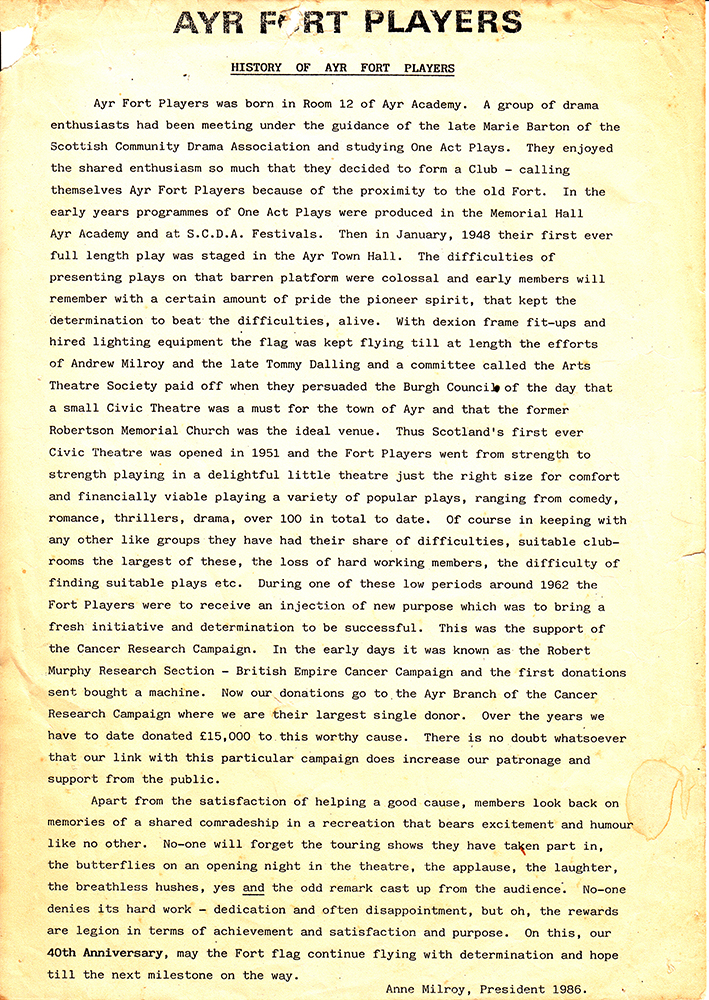 Report from our President in 1986

Fiona Shields has very kindly given us this report from Anne Milroy who was the Ayr Fort Players President in 1986. It is very interesting regarding our beginnings

Auditions for new productions are open to all who wish to attend. Aspiring actors aren’t the only section of the theatrical community that we welcome with open arms. It takes many people to stage our productions. So, if you think you wouldn’t be comfortable on stage, why not consider joining us in one of the many other departments such as Stage Management, Props, Wardrobe, Scenic Design and Construction? We expect all our members to be involved in all productions if possible – one production you may be playing the lead and the next you could be a vital part of the backstage crew.

Normally we rehearse twice a week in the centre of Ayr.

Membership costs only £15 per year, or £5 if you are a full-time student. If you are over 16 and are interested in becoming a member then fill in our form and we will let you know when the next audition is being held or invite you along to our current rehearsals.

Complete the form and send it in to us. You will be informed of the next audition taking place or will be invited along to watch a current rehearsal to give you a taste for what is involved in becoming one of the Ayr Fort Players family.

Please let us know in the form what aspects of stage work you are interested in. For example: acting; stage management; props; wardrobe; etc

Questions we often get asked - and the answers

How old do I have to be to join?

Answer. 16 or over. We would only use U16s if there was specifically a part for them in the production. If you are under 16 and are interested in theatre then we would suggest a local youth theatre such as Gaiety Youth Theatre, Centrestage, PACE or FIB.

I don't want to act - can I still join and take part?

Answer. As much as they would lead us to believe, it isn't all about the actors! We need backstage staff. People to gather and deal with props. People to source and deal with costumes. Stage Management. Set Design and Construction. Every single person is a much-needed cog in the wheel

What would be my commitment if I join?

Answer. If you join and audition and are offered a role in a play then you have to commit to rehearsing 2 nights per week. If this is not possible then you must think very carefully about auditioning for a part. Not being able to commit to that rehearsal period is not fair on the other members of the company. Should more than 2 consecutive rehearsals be missed then the director has the authority to recast the role. If you do not have a role in the play then we would ask that you try to come along to as many of the rehearsals as you can and to volunteer for other positions such as props, costume, stage management, etc.

What sort of productions do you usually stage?

Answer. We cover everything from high drama to farce. The only objective is to produce a play that we feel the public would like to come and see. It can be anything from Shakespeare to Ayckbourne to Tony Roper. That is what makes it such a diverse group in which to belong.

What does it cost to join?

Answer. There is a £15 yearly membership fee. For full-time students that is reduced to £5 per year.

I would love to join but don't think I'm good enough. What should I do?

Answer. You will never know until you try. Get in touch, come along to rehearsals, get to know everyone. We are a really friendly lot and will encourage you all the way.